By following the link below, it will take you to a map of Colorado where you can use the layer to identify which Cutthroat species is in each stream or creek and if it falls on private land or runs through Federal Ground.  You also have the option of Topographic, street, or several other map overlays. After you have selected the Cutthroat species you want to search, you can scroll over a stream and click on it for more details.

The most diverse trout species in North America, the historical distribution of cutthroat trout covers the broadest range of any stream dwelling trout in the Western Hemisphere. The rugged topography of their range has lead to isolation, which in turn has given rise to fourteen recognized subspecies. Four of these evolved in Colorado: the Colorado River cutthroat trout in drainages west of the continental divide, Greenback cutthroat trout in the South Platte and Arkansas River drainages, and the Rio Grande cutthroat trout in streams that drain into the San Luis Valley. In addition, the yellowfin cutthroat trout was historically found in Twin Lakes at the headwaters of the Arkansas drainage. Unfortunately, this predator that grew to over 10 lbs, is now extinct. All three remaining species have either been petitioned to be listed or are currently listed under the Endangered Species Act. Dramatic reductions in their range have been precipitated primarily by the introduction of nonnative salmonids. Specifically rainbow trout that hybridize with cutthroat trout, and brook and brown trout that tend to replace them in streams and rivers. In an effort to preserve the legacy of these fish, multi-agency conservation teams have been established for each subspecies.

Researchers analyzed DNA extracted from wild trout and from museum specimens collected from sites around Colorado and New Mexico as far back as 1856, then used that genetic data as a baseline for understanding the current distribution of Colorado's native cutthroat trout.

In addition to identifying the one remaining "true" greenback population, researchers identified two distinct genetic lineages within the range of Colorado River cutthroat trout, one in northwest Colorado and the other centered around the Gunnison River basin. Further research will be needed to understand the relationship between these two lineages.

In all, six lineages of cutthroat appear to have evolved in Colorado, with native ranges that roughly correspond to major drainage basins in the state. The greenback cutthroat trout, Colorado's state fish, was native to the drainages of the South Platte, while the long extinct yellowfin cutthroat trout of Twin Lakes actually appears to have been the native trout of the Arkansas River Basin. Rio Grande cutthroat trout still can be found in streams that drain into the San Luis Valley, while a lineage that used to call the San Juan basin home appears to be extinct as well. More research will be required to resolve whether the remaining two lineages that can be found across Colorado’s western slope are indeed two distinct subspecies – that work is ongoing.

Given that additional lineages of our native cutthroat trout were identified with the DNA testing above, we wanted to determine if these lineages displayed different physical characteristics as well.  This is particularly important since it has been argued that genetics should not be the sole factor in determining taxonomic distinctions, and that morphological traits (visual characteristics) are often better suited for discriminating taxa. 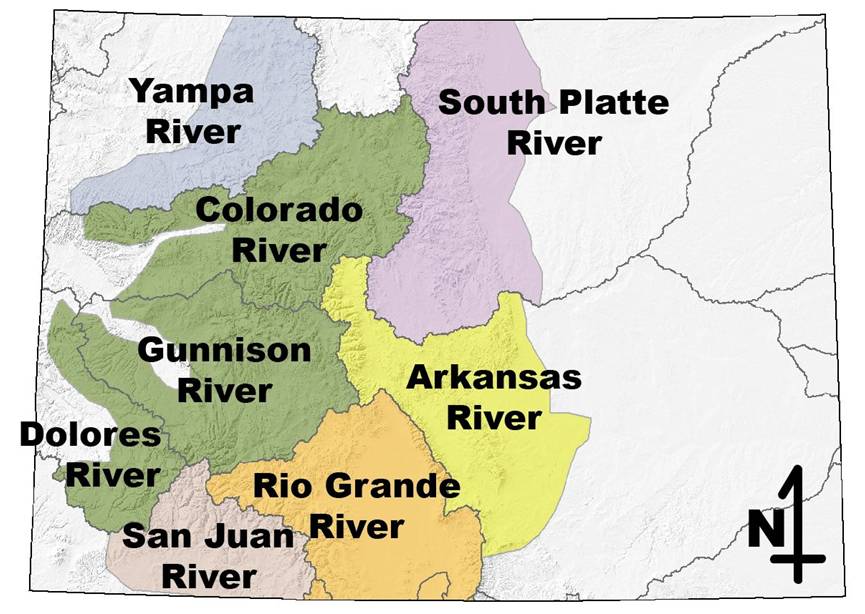 Colorado River cutthroat trout  are spring spawners, although low water temperatures at altitude can push spawning back as late as July. About a month and a half after the spawn, fry emerge from the gravel stream bed and head for slow moving water at the margins of streams. They are opportunistic feeders, focusing mostly on aquatic and terrestrial insects, although larger specimens will eat smaller fish. One of the reasons that anglers prize cutthroats is that they often eat in the middle of the day, and CRCT are no exception. The relative scarcity of food at high altitudes means that they aren’t all that choosy, as well.

Concerted research efforts starting in 2003 have since further clarified the native distribution of these fish culminating in 2012 with a study that combined an extensive search of remaining stocking histories combined with molecular analysis of museum specimens collected up to 150 years ago and extant populations (Metcalf et al. 2012). This research concluded that GBCT were native only to the South Platte River basin, and surprisingly, that only a single population remained.  This population in Bear Creek near Colorado Springs appears to have been founded from stock collected in the South Platte River basin in the late 1800’s.  These fish have survived as an isolated self-sustaining pure population of GBCT above a natural waterfall in just four miles of habitat for over 130 years.  Based on Metcalf’s (2012) findings, and a more recent study that demonstrated Bear Creek fish are visually distinct from other cutthroat trout (Bestgen et al. 2013), current GBCT recovery efforts are now focused on replicating the Bear Creek GBCT in hatcheries and re-establishing populations within their native South Platte River basin.

I am looking forward to seeing pictures of everybody's success with this challenge and the journey they took in finding each of these 3 species.  Remember to submit photos of your catches and location of each so we have the information for the certificates . Thank you for participating , your pictures can be submitted to  Trips@flyfisherscolorado.com  and we will post them to the club website and our other club social media sites.  Please keep in mind that all submissions need to be caught on Fly Fishing gear and in their native drainages, that is where the map at the top of the article will come in handy .